This paper is based on a presentation given at the AESGP meeting: Making the European Marketing Authorisation Procedures Work for Non-Prescription Medicine, which took place on 24th October 2013 at Canary Wharf, London.

The consumer pharmaceutical industry in Europe (represented by the industry body the AESGP) has consistently supported having non-prescription medicines eligible to use the centralised procedure, and this change became effective with the implementation of Regulation 726/2004.

The Centralised Procedure (EC 726/2004) may be used in two ways to allow non-prescription status for a medicine in all member states of the European Union:

1. There is optional access to the Centralised Procedure for direct non-prescription applications. Such applications must be for a medicine which is either:

a. Therapeutically innovative (a property which is unlikely for medicines suitable for non-prescription status). Or
b. Likely to provide a benefit to society or to patients e.g. if a new legal status allowed harmonised access across the EU.

Examples of drugs approved as non-prescription by this route include pantoprazole and esomeprazole for acid reflux and orlistat for weight loss.

2. Centralised reclassification or ‘switch’ in which the application is for a Type II variation to an existing Centralised Marketing Authorisation to reclassify the medicine to allow non-prescription use.

• An application to re-classify sildenafil for erectile dysfunction by this mechanism was withdrawn by the sponsor when opposition to the proposal became apparent during the review procedure.

Since the implementation of 726/2004 there has continued to be positive co-operation, with the AESGP invited to participate in the Sept 2008 CHMP meeting and shared EMA – AESGP platform meetings.

The use of the Centralised Procedure has important potential benefits to the non-prescription  industry, although some of these same features often also create potential challenges (Figure 1).

Figure 1: The Centralised Procedure: Benefits and Issues for Non-Prescription Status 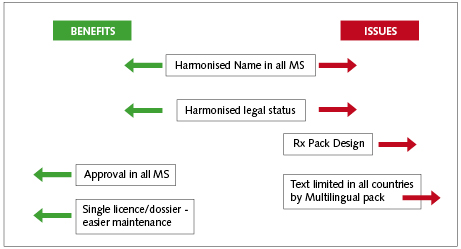 Is a centralised approach to deciding issues of legal status for medicines realistic when it is apparent that there are still major differences at national level within the EU? It is evident that there is major divergence of opinion between member states on issues such as:

This divergence of approach is also perceptible in discussion between member states on central procedure decisions and legal status. In the minutes of the March 2013 Pharmaceutical Committee Meeting3, it was reported that:

This discussion led to a comment that the Commission acknowledged the rights of authorities and indicated that it would reflect on how to address the issue.

These public records illustrate the difficulty that is to be expected when seeking to ‘harmonise’ national views during a centralised procedure involving legal status.

Experience to Date with the Centralised Procedure

There has been limited experience of using the centralised procedure to achieve non-prescription legal status, although there have been a limited number of approvals to date. The barriers that the procedure may present for decisions on legal status are perhaps best illustrated by examples which have not succeeded.

An application for non-prescription status for sildenafil in the ‘treatment of erectile dysfunction’ was withdrawn in November 2008 following CHMP concerns over potential delay/prevention in diagnosis of underlying disease, the need for complex product information, and the potential for misuse.

Importantly there were clearly concerns over differing pharmacy practice between member states and the ability of pharmacies in some member states to manage such a product in a non-prescription setting. Rapporteur and Co-Rapporteur countries for the procedure were assigned on the basis of the original prescription procedure, without regard to their experience in dealing with non-prescription status. As a result of the concerns of the majority of CHMP members, it was not possible to make further progress in those member states that expressed support for the change in legal status.

A further example of the difficulties inherent in seeking centralised approval is afforded by the 2011 application for non-prescription status for sumatriptan to ‘relieve migraine attacks in people previously diagnosed with migraine’. This was rejected in an initial decision and subsequently after appeal due to concerns over misuse, overuse, risk of misdiagnosis of migraine and lack of follow up when used in the non-prescription setting. This judgment was taken despite the fact that several triptans were already at that time (and remain) non-prescription drugs in several member states.

It seems that the majority of member states adopt a ‘precautionary approach’ when making decisions on legal status. In doing so there is a tendency to overlook or misunderstand the potential benefits of non-prescription medicines and therefore to see these as often outweighed by risks which may be well publicised but the impact of which may be misjudged.

What if nothing changes?

Given these difficulties and the national differences which they illustrate, the European Union is not currently as attractive an arena for investment in consumer medicines as it could be. After 10 years of experience an honest debate is needed on how to make the centralised procedure work for non-prescription drugs. This is particularly important since:

• The proportion of products authorised by the centralised procedure is increasing. Therefore future switches will be increasingly dependent on the Centralised Procedure route.
• Even member states in favour of a switch are restricted by negative centralised procedure decisions on legal status.
• There is currently no mechanism to generate EU ‘OTC market experience’ without prior approval as a non-prescription medicine. Even when reassuring OTC market data exists in the EU (as in the case of sumatriptan), centralised approval may not be granted.

The current application of the legislation, and lack of exclusivity for newly reclassified medicines, does not encourage investment in EU ‘switch’ applications.

The Centralised Procedure has proved a challenging route by which to deliver competitive single harmonised non-prescription licences that account for national differences in OTC practice. So could it be possible under the existing legislation to enable ‘national’ procedures for reclassification of centrally approved drugs in certain circumstances? Subsidiary questions which remain to be addressed here include:

2. Would it be possible to seek national non-prescription approvals subject to conditions only in those countries supportive of a reclassification, in order to allow additional data collection in the OTC setting? Subsequent broader approvals might then be possible if reassuring ‘market use’ data became available.

The existing Centralised Procedure could be strengthened by the use of dedicated experts in non-prescription medicines to review switch and OTC applications. In addition, uptake of the methodology specific to the assessment of Benefit and Risk for non-prescription status proposed by Brass et al4 could lead to greater recognition and articulation of OTC benefits e.g. increased access, greater consumer choice, and increased individual and public awareness of some diseases.

The OTC industry is a key partner in the future of self-care and an effective approval system for non-prescription drugs or ‘switch’ is a key enabler of greater self-care. Current EU legislation and procedures do not reflect the reality of non-prescription medicines in what is in effect a ‘non-harmonised’ Europe.

The use of the Centralised Procedure for re-classification of medicine to non-prescription status requires harmonisation, and the evident differences of opinion and practice around Europe make a harmonised system difficult in reality. It is clear that European Member States still see the legal status of medicines as a national competency and this implies the need for more flexibility in the existing systems for re-classification. This might include e.g. a mechanism for initial approval in a number of pilot member states to facilitate collection of data in order to support wider re-classification in the EU where appropriate.

Without clear changes in the way current legislation is applied, the future of EU re-classification or ‘switch’ to non-prescription status remains uncertain. As the future for switch increasingly concerns medicines approved by the Centralised Procedure, the need for a clear way forward becomes ever more urgent.