Self-care is promoted in many countries, to divert people from the formal health care system to save resources, while hopefully still meeting acceptable levels of care. In order for this process to function properly, the public must be able to correctly interpret symptoms and decide on an appropriate course of action. If an incorrect assessment is made, delays in care can occur, inappropriate OTC medicines might be taken, and inefficient use of medical care could be employed.

Most people hopefully know what to do about an acute stabbing pain in their head, blood in the wrong place, or severe fatigue and breathlessness. Things likely become trickier when the illness comes across as minor, perhaps belying something more serious. When people perceive illness, a complex process is initiated to determine how to return to health. This will include an assessment of symptom severity and how it (or they) will impact day-to-day life, all done in the context of a person’s present health, social circumstances, finances, and other forces. During every occurrence of an ailment, however, there is always the chance of under- or over-estimating the severity of a situation.

During a broad approach at assessing pharmacist prescribing for minor ailment outcomes, patients were asked to rate 10 symptoms on severity. The minor ailment program operates in one Canadian province and allows pharmacists to prescribe agents normally under the sole control of physicians. Any community pharmacy in the province can offer the service. Upon assisting a patient with an authorized condition, the provincial government pays the pharmacist a consulting fee.

A program is in place to assess pharmacist prescribing for minor ailments, with results to date on patient outcomes1, as well as pharmacist2 and physician feedback3. While accruing information on patient outcomes, one section of the online survey addressed patient interpretations of perceived severity for 10 symptoms.

Patients were recruited over a one-year period (April 2015 to May 2016). Adults were eligible for inclusion if they had been prescribed an agent by a pharmacist for one of 17 minor ailments. Conditions under the program ranged from mild acne to dysmenorrhea to oral thrush.

No sample size determination was made for this study. Instead, an attempt was made to capture all those who were eligible during that entire year. While every pharmacist in the province could legally prescribe for minor ailments, and all were contacted (email and fax-out) for this study, the pharmacists of 40 pharmacies agreed to participate.

Patients entered the study in the following manner. After being prescribed an eligible agent, a patient was asked (by the prescribing pharmacist) to consider participation in evaluating the service, done through information provided on a small card. When a person agreed to participate, they contacted the researcher to enroll. At that time, the researcher and patient determined an appropriate time to complete the online survey. The data collection tool and delivery mechanism has been used twice to obtain patient feedback1,4. The main sections of the survey focused on symptom relief, previous physician contact, confidence in what their condition was, and future plans for care.

Once these items were addressed by a responder, they came to the section with a list of 10 symptoms to rank on severity. These were chosen to reflect symptoms that were 1) often minor and common (constipation, diarrhea, head cold, low back pain, heartburn), 2) less common but still potentially minor (hemorrhoids), 3) more worrisome (chest pain, unintentional weight loss), and 4) being considered as future additions to the pharmacist prescribing program (difficulty sleeping, irritated eye with discharge). Responders were told to consider ranking each symptom from the perspective of a person of his/her age, gender, and health status. Otherwise, no context or nuance was included to further delineate any symptom (such as ‘difficulty sleeping for the past 2 weeks’ or ‘hemorrhoids with no throbbing pain but some blood’). However, discharge was added to qualify the symptom of an irritated eye, as future plans might include bacterial, viral and allergic conjunctivitis. Without that qualifier, responses would instead likely conjure up interpretations of dust in the eye, playing video games too much, or a lack of sleep. Response options for this series of items were based on a 5-point Likert scale: not serious, slightly serious, fairly serious, quite serious, and very serious. For calculating means, the following attributions were made: not serious = 1, slightly serious = 2, fairly serious = 3, quite serious = 4, very serious = 5. Responders were then asked whether they had ever experienced that symptom (YES/NO option).

Ethical approval was granted by the Research Ethics Board of the University of Saskatchewan.

For Tables 2 and 3, all 47 subjects were able to provide information, as it was predicated on being the responder to the survey. However, it should be noted that for any table, some people may not have responded to every symptom.

Statistical analysis was not performed on the data, given the low numbers accrued. However, groups were created relative to age and prior symptom experience to look for trends.

The lowest severity ranking seen was for head colds (1.3), while chest pain had the highest (4.1) (Table 2). Trends were seen in that men rated the symptoms as more severe than women (Table 5), whereas prior experience seemed to attenuate the severity level (Table 3). Symptom rankings relative to general health were not assessed, as only three people chose either poor or fair as their health status. 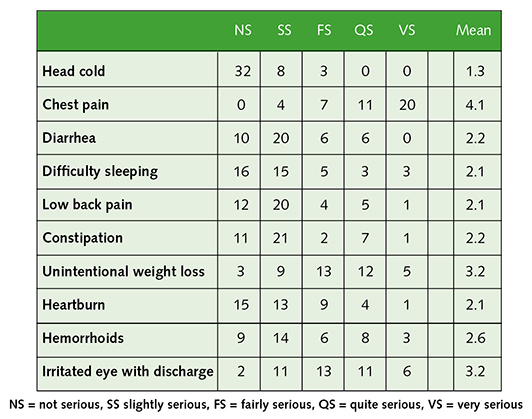 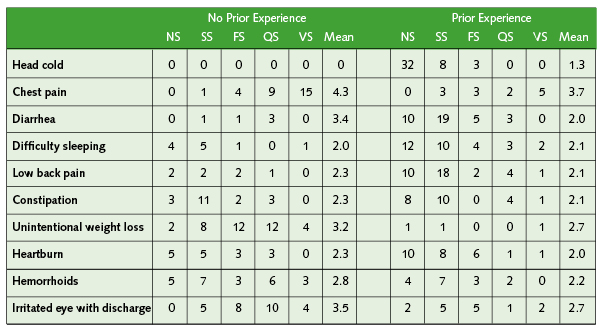 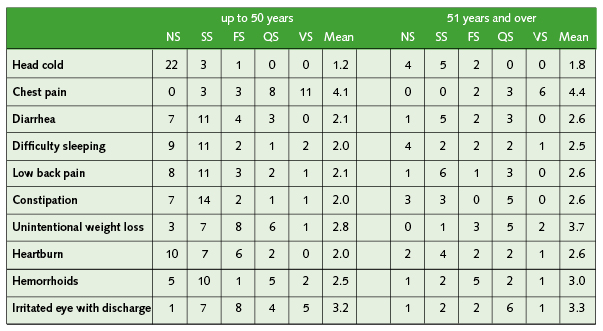 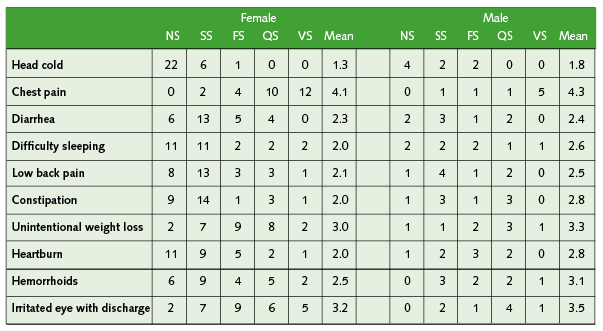 Patients tasked with providing clinical outcome feedback for 17 minor ailments (subsequent to pharmacist prescribing) were asked to rank another 10 symptoms on severity. As one would expect, the lowest ranking was for head colds, while chest pain had the highest severity rating. It was hoped that a connection was made to a potential heart attack for the latter. Heart attacks obviously occur far less often than colds and this may preclude a thorough understanding of them. A large survey in the US found 89.7% knew chest pain/discomfort was a symptom of a heart attack, with about half feeling it to be the most important one. Knowledge of other heart attack symptoms was less evident5. A reason some delay getting care is a feeling that symptoms would go away or that they were not serious6.

Unintentional weight loss and irritated eye with discharge rounded out the top three on severity. Unintentional weight loss is generally not reflective of a minor situation, being a red flag under GERD management7 as well as low back pain8, to name just two scenarios. An irritated eye with discharge is often consistent with viral, allergic, and bacterial conjunctivitis, situations that are not overly serious, but also bacterial and herpetic keratitis, which are9.

Many reports have focused on how the public interprets symptoms. Maiman, for instance, found mothers rated a cough for 2 days and a scratch on an arm/leg (infection) as more problematic for their kids than a toothache or diarrhea11. Rennie et al looked at patient response to three levels of symptoms – one minor (diarrhea), one more severe but likely to be self-limiting (back pain), and one potentially very severe (rectal bleeding). People preferred to manage minor symptoms by self-care or by visiting a pharmacy. For the moderately severe situation, people preferred to consult a GP, as was the case for the very severe symptom12. This is likely reflective of assessment ability.

Gender difference in health care is an extremely rich area of study. Klonoff and Landrine, for example, found years ago that women were more likely than men to view illness as caused by sin and a form of punishment13. In the current work presented here, men ranked symptoms higher in severity than women. If nothing else, it supports the age-old notion that men are bothered more by colds than women.

Previous experience is another important factor, as it should build knowledge and lead to greater confidence in how to approach a situation14-17. Having gone through something like bacterial conjunctivitis can assure a person that the condition is not worrisome, whereas a person with inexperience might be (incorrectly) concerned about long-term vision loss.

Cantrill and colleagues examined how the public view minor illnesses18. Interviewees agreed that coughs, colds, the flu, and general aches/pains constituted minor symptoms. There was less agreement on cystitis, hay fever, headaches, and indigestion. It appeared that previous experience and personal knowledge of an illness was key to a decision to classify symptoms as minor. For most, a minor ailment was also synonymous with a condition that they felt able to self-manage. However, people did still consult MDs for minor complaints, at times to obtain a certain prescription medicine, consistent with taking control of their illness. These researchers felt it was notable that whatever reasons patients gave for making a minor ailment consultation, it was a decision made with forethought and clearly viewed as a rationale course of action.

Stoller et al assessed the appropriateness of lay evaluations based on symptoms experienced by 667 elderly patients19. The number of symptoms under scrutiny was extensive (n = 23) and included fever, shortness of breath, chest pain, nausea, rectal bleeding, vision problems, and headache. One in every eighth person assessed was considered at some medical risk, with the researchers concerned that medical care had not been sought. But, this should not necessarily imply that any patient’s actual interpretation was incorrect, just that medical care was not pursued.

At an army medical center in Texas, outpatients were found to have many bothersome symptoms (mean of 3.0 symptoms considered to be major). The frequency with which individuals obtained medical care for symptoms varied considerably. However, high rates were seen for chest pain, numbness, and palpitations, which may be indicative of appropriate assessment abilities (although neither rate reached 100%). A lesser rate of professional care was sought for others – 61% of patients admitting they were depressed and 51% who were anxious had not yet been helped20.

Another aspect for determining the public’s ability to interpret symptoms is agreement between patient and doctor as to what in fact constitutes minor. Researchers in the UK noted that while approximately 40% of interviewees indicated they were seeing an MD for a minor ailment, about half were judged not to be minor, leading to a conclusion that over 50% of patients had under-estimated their condition21.

The limitations of the current research are extensive, including a sample size that was exceedingly small, as was the range of symptoms. The sample was based on people seeking help for minor ailments as opposed to ones taken from the general population. No or minimal clinical context (for example, adding perspective on illness length or other extenuating circumstances) was provided with the symptoms, thus a wide range of speculation was likely. Even when provided, an irritated eye with discharge might be interpreted to mean anywhere from purulent to watery. Finally, no attempt to validate whether the symptom had been experienced by any given patient was taken.

The proposed next step for research is to assemble scenarios based on some of the 10 symptoms listed here. More clinical depth will be in order, much like the scenarios developed by Rennie et al12. Then, the public, pharmacists, and physicians will be surveyed to approximate when a doctor should be consulted for each scenario from each group’s perspective. Previous experience and other variables will be collected. For a scenario involving diarrhea (six times) over the past 24 hours, with mild cramping and loss of appetite (by way of example)12, it will be of interest to see how congruent each group’s estimation is.

Findings in a small number of subjects confirmed existing literature on the potential variables that can influence symptom assessment – gender, age, and previous experience to name three. The next research step will be to create illness scenarios and have patients, pharmacists and physicians provide timelines as to when physician care would be prudent.

Correction: In the original published version, Table 2 was incorrectly labelled as relating to females only. This was corrected on 23.07.2018.