Allergic rhinitis (AR) affects around 10-20% of the general population in developed countries and is increasing in prevalence1. AR is characterized by nasal itching, sneezing, watery nasal discharge, and blocked nose. Additionally, conjunctival symptoms (allergic conjunctivitis), impaired smell and headache may occur in association. According to the time of exposure to antigens, AR can be subdivided into perennial, seasonal, and occupational disease. Perennial AR is most frequently caused by persistent exposure to dust mites and animal dander. Seasonal AR, most commonly caused by pollen, produces the familiar ‘hay fever’ associated with the warmer months of the year.

Self care options for allergic rhinitis include most of the useful classes of medicines available and with knowledge and advice most people can manage their symptoms adequately without ongoing medical supervision. Depending on the specific allergen involved, small lifestyle adjustments can also bring about a real improvement in the lives of sufferers. For this reason, allergen testing is to be recommended if the cause of symptoms is not obvious, in order that avoidance measures and forward planning can reduce the number and severity of symptomatic episodes.

Allergic rhinitis, if inadequately controlled, can have a significant impact on quality of life1. If self care fails to control symptoms such that normal functioning is possible, then a review of the diagnosis and treatment options is indicated. Symptoms of allergic rhinitis disappear completely in 10-20%, and improve spontaneously in a high proportion (40-65%) of sufferers over time2.

Often the trigger for symptoms is obvious to the sufferer, or readily identified from the pattern of symptoms. Table 1 summarises the patterns typical for the commonest allergens. 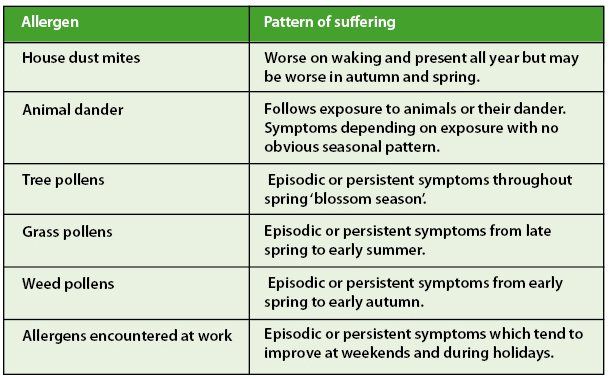 People with typical symptoms and those with a family history may have tried treatments for ‘hay fever’ obtained from pharmacies or elsewhere; if symptoms improve with antihistamines or topical steroid preparations then an allergic cause is very likely.

Allergy testing is useful if the allergen is not clearly identifiable from the history, or if other causes such as irritant rhinitis are suspected. Sometimes clearly identifying the allergen(s) responsible for symptoms is helpful to people wanting to adopt the most effective lifestyle adjustments in order to avoid exposure.

Seasonal allergic rhinitis is typically simple to recognise as it coincides with the arrival of the relevant allergen in the environment. Other causes of rhinitis also have a close temporal relation to the cause and this is often enough to indicate the alternative possibilities. Table 2 gives the commoner alternative diagnoses and helpful distinguishing features. Alerting people to these alternative causes of rhinitis can be helpful when the cause is avoidable in the future.

Table 2: Other (non-allergic) causes of rhinitis 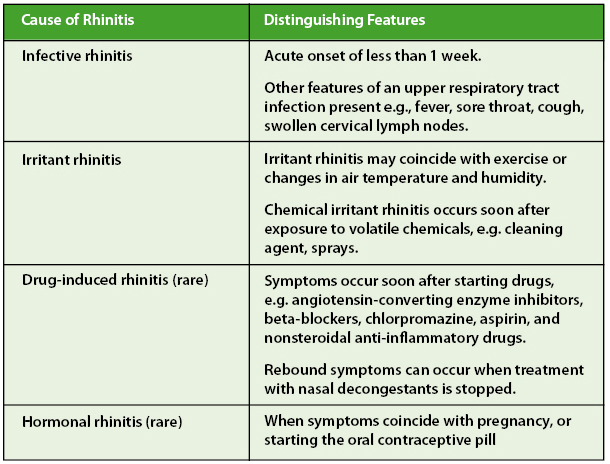 Rarer causes of rhinitis (e.g. non-allergic rhinitis with eosinophilia syndrome) are sometimes identified when allergen testing is negative. Atypical patterns of symptoms and/or non-response to treatment may prompt consultation and lead to a search for structural problems or systemic conditions that can mimic the symptoms and signs of rhinitis.

Simple advice on lowering exposure to allergens is helpful for most people with allergies to pollen, house dust mite or animals, and should be the first step in trying to control symptoms. However more extreme allergen avoidance strategies (e.g. to house dust mites) may only be justified when symptoms are inadequately controlled with suitable drug treatment and when the allergen is confirmed on testing.

Grass pollen allergen: Pollen counts are at their highest in the early morning, evening and at night, so avoiding grassy open spaces at these times may be helpful. Closing windows in houses and cars when pollen counts are high is also prudent and many modern cars have pollen filters which should be changed regularly.

Confirmed house dust mite allergy: Rigorous avoidance measures can be inconvenient and expensive and evidence for their effectiveness is not strong5.  For these reasons, such measures are really only appropriate for highly motivated individuals who are inadequately controlled with preventive drug treatment and when the allergen has been confirmed by allergy testing.

For those motivated to try house dust mite avoidance measures, mattresses and pillows can be fitted with house dust mite impermeable covers; synthetic pillows and acrylic duvets should be used in preference to other materials, and furry soft toys should be removed from beds. Bedding and furry toys should be washed once a week at high temperatures (60° C or above). In bedrooms, wooden or hard floor surfaces are preferrable to carpets, and blinds with surfaces that can be wiped are preferrable to curtains. Regular dust removal from bedroom surfaces should be carried out with a damp cloth. Even if these measures are diligently applied it can take some time for any improvement in symptoms to be apparent1.

Confirmed animal allergy: Avoidance of animals and of surfaces likely to be contaminated with fur and dander are obvious measures. When symptoms are severe it may be best to restrict animals to rooms not frequented by the sufferer.

Both acute and preventative treatment options for self medication are available in many countries. The choice of treatment is generally governed by the predominant symptoms, their frequency and the preferred route of administration. Accordingly, acute episodes of rhinitis alone may be best treated with intranasal antihistamines. However, if the rhinitis is accompanied by allergic conjunctivitis, or if oral treatments are preferred, oral antihistamines are available including non-sedating, once-daily preparations.

If people suffer more frequent or persistent symptoms, then longer term or preventative treatment may be suitable. Here the choice is between daily oral antihistamines, or intranasal steroid preparations (also available as once daily preparations). The former are preferred if other allergic symptoms are prominent, while the latter are particularly suitable if symptoms are predominantly nasal and/or blocked nose is a prominent complaint.

Depending on the allergen involved, treatment may need to be continued throughout the season when the allergen is prevalent. People who have recurrent episodes of allergic rhinitis controlled by intranasal corticosteroids should ideally start treatment at least 7 days before re-exposure to allergen. When timing is uncertain, e.g. with pollen, it may be best to start treatment several weeks before the likely start of the relevant season.

Good technique is important for intranasal sprays and the advice can be summarised6:
• Gently blow the nose to try and clear.
• Shake the bottle well.
• Close off one nostril and put the nozzle in the other directing it away from the midline. Tilt head forward slightly and keep the bottle upright.
• Squeeze a fine mist into the nose while breathing in slowly. Do not sniff hard.
• Breathe out through the mouth.
• Take a second spray in the same nostril then repeat this procedure for the other nostril.

If self-treatment fails to control symptoms adequately, or if there is considerable disruption to normal daily life, then consultation with a doctor to review the diagnosis and treatment options is sensible.

Allergic rhinitis is highly prevalent in developed countries and has the potential for severe disruption to quality of life if symptoms are not controlled. Typical symptoms are readily recognised and are not often confused with other causes. In many individuals the allergen is obvious from the history, in others allergen testing is helpful in planning allergen avoidance and treatment strategies.

Many sufferers can be greatly helped by simple pragmatic advice on reducing exposure to the precipitating allergen. More demanding allergen avoidance regimens (e.g. for house dust mite) may require professional advice, since they are expensive, inconvenient and may be appropriate only in selected cases. The major classes of treatments available for allergic rhinitis are available for self-medication in many countries around the world. Treatment may only be needed short term for acute episodes, but more persistent symptoms may require longer term and preventative self care options including topical steroid preparations. Good technique when using nasal sprays is important to optimal efficacy. In most cases symptoms can be controlled with self care measures, including pre-emptive use of preventative treatments before predictable allergen exposure.

Allergic rhinitis is the most common reason that people with atopy self-medicate. When consulted, healthcare professionals can give pragmatic advice on lifestyle and treatments to help most sufferers control their symptoms independently, and without degradation of their quality of life.

Conflict of Interest Statement: None.